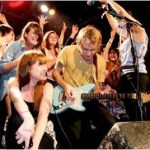 RMG created a long term partnership with Champion Sportswear and CMJ from 2011-2015 to be the lead apparel sponsor of the CMJ Music Marathon held in NYC during October. Champion also hosted the premier music showcase of the festival headlined by bands successful with Millennials and college students. RMG can also create on campus promotions that could ultimately reach over 4mm students on 450 campuses in the US.